Not your conventional romance 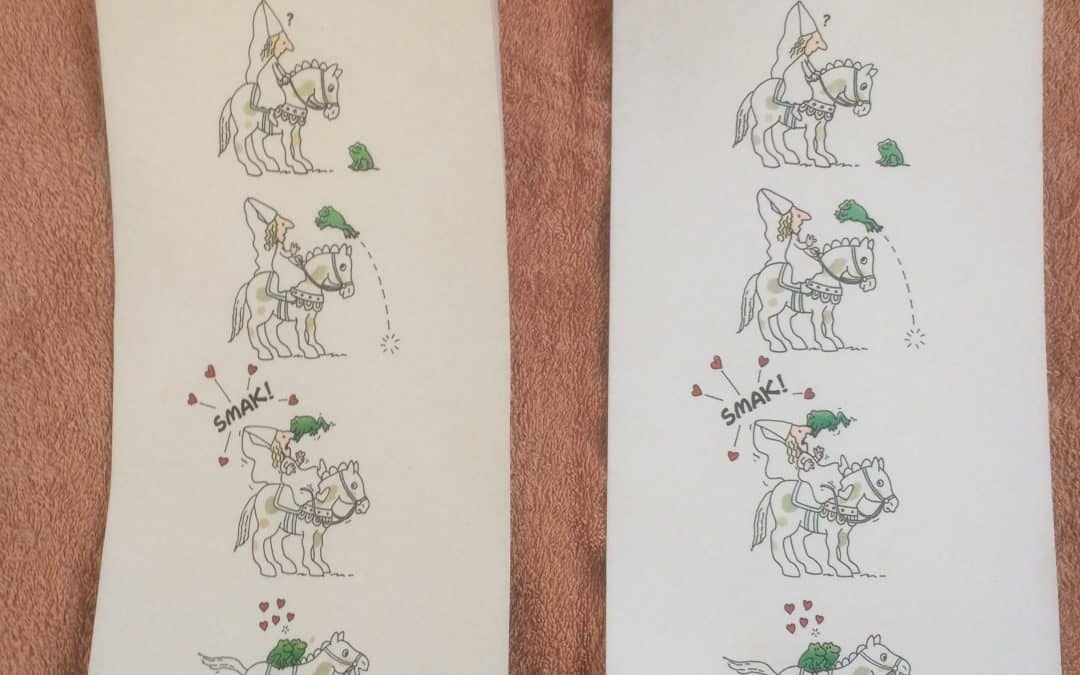 On Valentine’s Day 1989 the new love of my life and I exchanged suspiciously similar-looking envelopes – and found we had indeed bought the same card.

Mine in Birmingham. Hers in Walthamstow.

It showed a princess encountering – and being kissed by – a frog. Turning into a frog herself. Then riding off on a white horse with her frog prince.

‘Ours is not your conventional romance’

Our particular unconventional romance began towards the end of my 7-year battle with ME, most of which I’d spent confined to my flat. Apart from occasional excursions to work. And (every week or two) to play early music with a local group in Hemel Hempstead. Involving two or three public performances…

Which is how we came to be sharing an event at the Chiltern Open Air Museum with a Wars of the Roses re-enactment group called The White Company. And playing a set of late medieval dances.

Some of the women from the group came and danced to our music – then lured me away to their campfire for supper. Would I like to be a White Company musician?

I looked round my charming companions – it was a no-brainer. Of course I would.

So I did. And suddenly, at the age of 37, I had found the partner I could be happy with for the rest of my life.

And I like to think she had the measure of me right from the start.

But it wasn’t quite that simple…

These things never are. There was the occasion at Kidwelly Castle where I contrived to lose the keys to the Company’s hired minibus after sharing the driving with Rosemary. (They did turn up – eventually – but only after we’d thoroughly tested each other’s ability to deal with a crisis.)

A little later the Company asked for my assistance – as a ‘scriptwriter’ – for an event at Orford Castle. We contrived a storyline in which a recently-widowed lady (Rosemary) with an annoyingly new baby (provided by another member) was sent away to Orford by her sleep-deprived family. And pursued by three suitors.

We arrived at the event itself just as Rosemary was putting the finishing touches to a long red Burgundian gown suitable for my new, more elevated status (goodbye scummy musician, hallo wealthy merchant…) There was no time to erect our tent, and in our posh clothes we weren’t really dressed for it, either.

The day went as scripted, and after a splendidly elaborate 15th-century dinner served in Orford’s Great Hall, I took Rosemary to one side, dropped to one knee, and formally proposed. Somewhat bemused, she accepted – and we went back to face our public…

…until, finally, we faced the prospect of either erecting a tent, or finding somewhere else to sleep at five minutes’ notice.

The pub was full. So was the Bed and Breakfast. And Rosemary looked thoughtful. Finally she asked: ‘Did you really mean that? The proposal?’

It was a fair question. We’d had a good deal of wine with the meal, and were still looking at the world in a rosy and pleasantly alcoholic light.

‘Then of course I accept.’

‘Great. Now all we need is somewhere to sleep, and this will be a perfect day…!’

Just one. After years of searching for the ‘right’ relationship, it came when I’d pretty much stopped trying. Naturally. And it was so obviously right that I couldn’t help wondering why I’d ever put up with anything else… 🙂

So did we find a place to sleep? Dear reader, if you want to know you’ll have to read more…