Why I want to monkey with Mailchimp

In earlier blogs – like this one – I’ve often mentioned commercial email newsletter services like Mailchimp and Aweber. I have nothing against them at all, because they and I are (usually) dealing with different markets. But just occasionally a client will ask us to work with a service they already use.

Which is how I came to spend a week monkeying with Mailchimp. And specifically with their template-building tool. Which was mildly annoying, because when it comes to templates…

I could do that with one hand tied behind my back

Well… yes I could. Just. But it’s not a lot of fun. And that was honestly what it felt like when I was trying to build a visually effective layout using Mailchimp’s template-building tool!

For starters, the width was limited by default to 600 pixels. Fair enough – that’s the recommended industry standard. But after 10 years of messing about with emails (and testing them thoroughly) I’ve found that in practice it’s OK to go a bit wider – to 650 pixels. Which doesn’t matter much until you start trying to build the design I actually wanted – a three-column layout with two columns for the main text and one for a good, solid sidebar.

In several of my own, hand-coded newsletters that works very well indeed – so well, in fact, that I like to use it a lot – as in the example below. But in the draft three-column Mailchimp template I finished up with a sidebar so narrow that it was barely worth having – unless I made the type so small that no one over 40 would be able to read it! (If you’re having the same problem with this image, just click on it to see a full-sized version…) 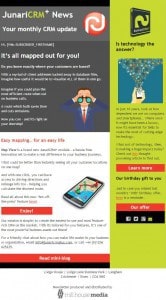 So I ditched the sidebar. With huge regret.

Then I started work on formatting the individual elements within the newsletter. All credit to Mailchimp, there were plenty of options there for those who knew what they were, how to find them, and how to use them once they’d been found. But my guess is that a lot of people will miss out on one or all of those counts. Especially if they haven’t (like me) spent years battling with HTML.

So who needs HTML?

In theory, you shouldn’t need to know anything about code to use Mailchimp. That’s even true in practice, if you’re happy to accept the default formatting you’re given. But suppose you want to create an email that’s closely matched to the branding on your website? How easy is that – without at least a little knowledge of HTML coding?

In practice it’s a little tricky. For example, Tim Maulden at Virtue Design specified the orange colour in our branding with the hex code #e7a614, Once you find a place to do it in Mailchimp you could, again for example, set all the first-level headings in your newsletter so they appear in that colour. You could also specify it for links, for a background colour, or pretty much anything else that needs a colour.

All of which requires at least a nodding acquaintance with HTML code.

The same goes for critical adjustments like margins and padding, which can make all the difference to the look and feel of your email. And when it comes to choosing typefaces I’ve seen Mailchimp emails produced by non-professionals which have a different typeface for each section. I’m all for variety, but not to that extent…

Do I sound picky? I probably am. But there’s one acid test which, for me, is make or break.

Does the email look OK when it arrives in the inbox? Whichever of the (most common) browsers you are using?

Getting it right in the inbox

The truth is, this is one of the hardest things to get right with any email that’s going out to more than a handful of people.

Because there are dozens of different email browsers. And – speaking as someone who codes emails professionally – all of them seem to compete to find new ways of breaking valid code.

Some of the ‘changes’ can be quite subtle. A shift of typeface. A change of colour. Spacing that doesn’t quite do what you want.

Others can be devastating. Whole chunks of your email disappearing. Images resized so they no longer fit the layout. Columns arbitrarily split and separated.

So it’s important to test your email in as many different browsers as possible – for which I use the excellent service provided by Litmus.

Because it isn’t just computer-based browsers you need to think of. You also have to consider what it’ll look like on mobiles and tablets – especially now that more than 50% of emails are first opened on mobile devices.

Ideally, a service like Mailchimp should give you an ‘unbreakable’ design provided that you follow its rules. But the truth is, it doesn’t.

When I tested one version of my design, it performed well – except in Outlook. Which is no surprise, because Outlook can break just about any email you throw at it.

But it shouldn’t have broken this one – especially when not everyone will have the testing tools we have here at Mill House Media.

True, Mailchimp have their own, very good testing tool – for which you pay a little more.

And it’s also true that a fully robust email isn’t just a big ask. It’s an enormous one.

But it does mean that even with a standard Mailchimp template, you’re not entirely ‘safe’.

So will I use Mailchimp again?

Yes, of course I will. For several of my new clients I’ll have to. But I will seriously consider substituting my own hand-built code for Mailchimp’s ‘safe’ alternative. Because – from a purely personal point of view – I prefer to work with both hands free…